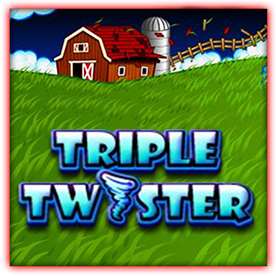 Wild: the game starts when the tornado (wild) will only appear in the first three reel, tornado (wild) with alternative, can replace any symbol, including the Weathervane (scattered).
- Whenever there is a tornado (wild) in the winning combination, wild will cover the entire reel before the prize is awarded.

-The prize is triple when one or more wild subtitute in a winning combination
- When the Weathervane (scatter) 1 or more and tornado (wild) appear at the same time, (Wild) can only be a weathervane (scattered ) recorded 1 line points.
Scatter : Weathervane (Scatter) pay are the total bet multiplied by the odds.
Other rules:
- Scores are calculated from the left side of each bets line, including scatter icons.
- Each game must have 50 active payline.
- The total score for each round is multiplied by the odds per line bet.
- Highest win only on each line.
- up to 50,000 times the prize money.

Triple Twister Feature
9 free game are awarded when 3 or more scattered weathervane appear from left to right. Whenever the wild appear during free games, it replicate itself onto 1 and 2 additional reels before pays are awarded.
- The feature can be retrigger with retrigerring scatter counted before any wild replication.
-Free game are played at the line bet of the triggering game.